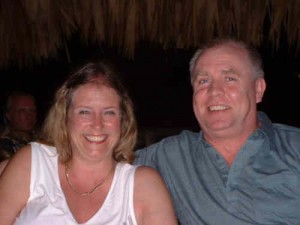 My name is Shelagh Jones and I live with my husband Ken at Red House Farm, Walton Highway, on the Cambridgeshire / Norfolk border. I have a daughter Michelle who is in the army, Ken has a son who is a web developer.

We moved to Red House Farm on 1st October 2003 from St. Albans in Hertfordshire, where we run a taxi company. We wanted to move to somewhere that had a bit of land so the dogs would have more room, and we were very lucky to find this place.

It was about eight years ago that I met and fell in love with the Leonberger; it is quite a long story but here goes. My German Shepard had to be put to sleep due to ill health and I wanted a big healthy dog to replace him. I had read about the Anotolian Sheep dog but Ken wasn’t sure, so we went to Discovering Dogs. We decided against the Anotolian, but like the look of the Estrella (we somehow missed the Leonberger stand). We got talking to Sylvia Cox and went to visit her kennels. I fell in love with one of her bitches called Maple and Sylvia was due to mate her, so I put my name down for a puppy. We waited for over a year, but no puppy. Then Sylvia imported two Estrella puppies and as I lived nearer to the quarantine kennels than she did, I offered to go and socialise them. Then my love affair with Leonbergers was about to begin.

Sylvia’s puppies were staying at Lyn Hodge’s kennels and on the first day I went to visit them, the automatic gates opened and I started to drive through, then there was a deep throaty bark to my right and a great big head loomed through my window. I thought “oh my god, if he’s not friendly, I’m dead” but Khan just licked my face and that was it, love at first sight, I was hooked. I knew I had to have one of these great bears for myself.

After visiting the puppies for a few weeks I got talking to Mrs Hodge and she introduced me to her other dogs and put me in touch with Mr John Feehan, who had a litter due, and the rest is history, so thank you Lyn. 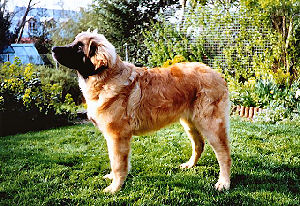 We got our first Leonberger, Manorguard Lionheart (Braegan) but things did not go well, he was a difficult puppy right from the start, and things got worse. We’d had a German Sheppard with a dodgy temperment, but Braegan was different, he didn’t seem to respect anybody, we now think he had something wrong with his brain. When he started biting people without any warning we knew we had reached the end of the road and he had to be put to sleep. It was the worst decision we have ever had to make, it was not easy, but we knew it was for the best.

John Feehan was a great help at this time, and we decided to try again, and [Eddie] (Manorguard Limited Edition) came into our lives. He was Braegan’s brother but as different as chalk and cheese. Eddie is the most laid back, loveable dog you could ever meet and such a joy to live with, I had my big bear at last. 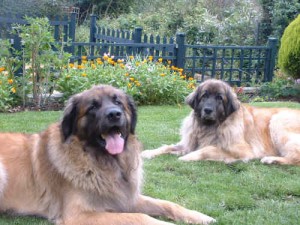 As every Leonberger owner will tell you, one is never enough and when Eddie’s mum Savannah (Leonberzt Flicken Fran Havanna) became ill and had to be spayed I nagged John to let her come and live with us and thankfully he agreed. She had three happy years with us but then she was diagnosed with cancer and passed away at only five years old. It was heartbreaking but worse hit was Eddie, he didn’t eat for four days and was so depressed we were really worried about him. I phoned the secretary of the Leonberger club to see if she knew of any Leonbergers that needed re?homing, and by chance she had a young bitch, so Brenna came to stay. Eddie fell in love at first sight, letting her eat his food, sleep in his bed and play with his toys. Life was getting a bit cramped in St Albans, so we started looking for somewhere else to live, but it had to be close enough for Ken to drive back each week. We looked around the Cambridgeshire / Norfolk / Lincolnshire areas, and here we are. We love it here; it’s a bit like Animal Farm, we have a goat, 3 sheep, 2 cats, 3 dogs, 4 geese, and 7 chickens (all pets). I spend most of my day looking like a farmer, covered in hay and mud, but I wouldn’t change it for the world. 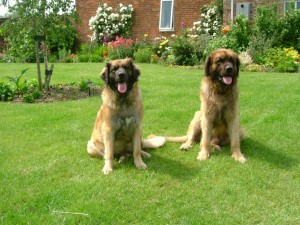 As Eddie is getting on a bit we decided we wanted his son to carry on his name, so Eddie was mated to Mrs Jean Wood’s “Dajean I Belive in Angels” and had 9 puppies. I chose [Logan] (“Dajean Special Edition for Leovanna”) and he has really fitted in well and is growing up nicely. Unfortunately we have had to part with Brenna as she became quite partial to chickens and kept getting in and killing them, then she started on the geese and we thought that it would be better if she was in a home with no small animals, but maybe with some small children for her to chase :o) It was very hard parting with her but we had to consider the other animals as well. On a brighter note, we have another addition to our family, a little girl puppy called [Keira] (Debbollingby Stupid Cupid at Leovanna) she is a lively little girl and has settled in really well. Logan just loves her and thinks she is his personnel toy, while Eddie just ignored her.

In June 2006, Eddie, our oldest dog collapsed. The next morning, he was still on his bed, still unable to walk, so we had to put him to sleep. We dug a big hole in the paddock and buried him there. We bought a tree and planted it on top as a sign of remembrance.

Fast forward one year later, and grown-up Keira has now mated with Logan and produced their first litter of 5 boys and 4 girls.