I cannot believe the three weeks went by so quickly and Schubert has made his way home, [Mishka] and [George] are really missing him. They had such fun all playing together. I will miss him but also looking forward to some peace and quite, he is a very vocal little boy, but he still loves his cuddles. It is just as well he has gone home because [Keira] is just coming into season and he is showing a very unhealthy interest in his mother, even more so than [Logan] and George!
We are soon going to have another house guest to stay for a while from Wood Green, this one is going to be quite interesting, I will tell more later.
We met up with Skyla on Sunday and she is doing really well, a very pretty little lady who was coping very well with all the sights and sounds of the Peterborough Autumn Show. I took Logan and George and it took us hours to get round.
George entered the world of show on Sunday 21st Oct, he didn’t get anywhere but I was so proud of him. He took it all in his stride, he didn’t poo in the ring or roll over and he was such a good boy walking around. Although he got a lot of comments about his wild hair do.
Our new house guest has arrived and has caused quite a stir, I am concerned !! Logan has turned gay !! We have been keeping Keira separate as she has been in season but she rejoined the pack on Sunday, but Logan only has eyes for our new quest and totally ignored her. She seems quite put out that Logan has fallen for a blonde bombshell, trouble is, it’s a MALE poodle, but Logan doesn’t seem to care. Oh dear, perhaps he is hoping to make Poobergers !!!
I said earlier George didn’t get anything at the Leonberger Club show, how wrong I was. Thanks to some totally inconsiderate people who think that running around a ring and maybe getting that all important piece of card is more important than our lovely dogs health. I am now surrounded by 4 snotty nose, runny eyed, coughing Leos, who are feeling very sorry for themselves, but worst of all was the dog I was looking after for Wood Green was taken really ill on Saturday and had to go back to the kennels for treatment. I just hope you feel it was worth it, you must know who you are ! I am now going to dish out cough medicine and tablets and wipe some noses. I wonder, can humans catch it ? I have had a sore throat and a bit of a cough myself and now my nose is running, oh boy !! I think I’ll just find a cosy basket and curl up. 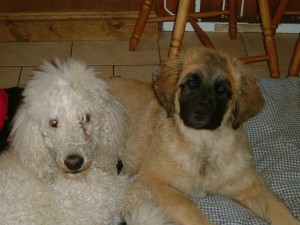 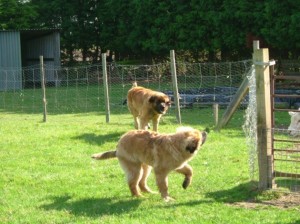