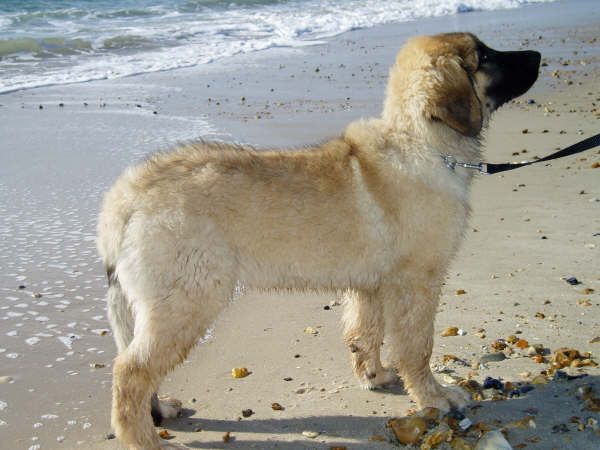 Tonka on the beach

Here we are, 2008, but what happened to 2007, I seem to have blinked and missed it. I know it was a busy year, with matings, litter and my daughter getting married, and not forgetting the dreaded kennel cough, but it has just flown by. Please don’t tell me it’s old age, although some mornings it might just be true !

I must say thank you to all my puppy people who sent me such wonderful photo’s and cards, it’s really good to know that all my babies are doing so well and have such happy homes and that they have kept their friendly and happy natures. I feel that I have done something right.

My Leo herd is doing well and seem to be sorting out the pecking order, with [Keira] being the boss. [Mishka] is coming on very well and can do no wrong (in Ken’s eyes), but I feel that she might become a bit bossy like her mum. [George] on the other hand is getting more like [Logan] and [Eddie] everyday, he is a big soft dollop and Ken says he looks more and more like the village idiot everyday, but I just love him to bits, he only has to look at me with those big soft eyes and I just melt, I think he is so handsome.

It has been hard work having two pups only two months apart, and I would not recommend it to anyone. I don’t think you can give enough one on one attention to them and I feel guilty that George hasn’t had as much of my time as he should have had, but he is still a lovely boy. Hopefully I will be able to go to a lot more small shows this year, I must admit that I have missed going to the shows and seeing how all the dogs are coming on. Talking of shows, I must say well done to George’s mum, Manorguard Bewitched, who won Limit Bitch and George’s sister, Ammolitegold Amour, who won Minor Puppy Bitch at the LKA show just before Christmas. A well done also to Carol and Tonka, Leovanna First Lad, who came second in his first show,(at Wood Green), what a clever lad. Hope his sister (Mishka), follows in his foot steps.